As scientists are steadily discovering more about the potential negative effects blue light has on the human eyes, blue light blocking glasses are soaring in popularity.

What is Blue Light?

Blue light is one of the colors in the light spectrum that is visible to the human eye. It is a short wavelength and therefore, it emits a high amount of energy.

Blue light is both natural and artificial. It is actually responsible for the sky being the color blue. In the days of old, the sole source of blue light was the sun. The introduction of technology has changed that though. Blue light wavelengths are everywhere now. It comes through LED and florescent lighting, television, smartphones, laptops, tablets, computers, gaming systems, and many other electronic devices.

What’s the problem with blue light? Because they are comprised of short wavelengths, they collide with molecules in the air. This process causes the blue light to scatter and disburse. In their natural form, blue light waves regulate our circadian rhythm which includes our bodies’ sleep and wake cycles.

Blue light has other natural jobs too. They boost our moods, elevate the amount of time it takes us to react to a situation, promotes alertness, and increases our sense of well-being. Artificial blue light, on the other hand, isn’t so beneficial.

The Lurking Dangers of Blue Light

Blue light exposure is known to have risks and negative effects. Being the highest energy emitting wavelength in the spectrum, it tends to flicker more readily and longer than any of its weaker counterparts.

The flickering of blue light wavelengths creates a glare which interferes with the way we see things. It distorts clarity, sharpness, and visual contrast. Physical and emotional fatigue, eye strain, headaches, confusion, and a slew of other problems are direct results of blue light exposure through electronics, lights, and various things we are around on a daily basis. This condition is often referred to as “computer vision syndrome”.

Because blue light is capable of penetrating straight to the inner lining that is in the back of the eye called the retina, cells that are sensitive to light can be damaged. The implications can range from mild to severe.

The statistics are not in our favor. According to the Vision Council, forty-three of all adults in the US have jobs which require them to spend an extended amount of time on a computer, tablet, or cell phone. Over 80% of American adults admit they spend time on a digital device within an hour of going to bed. More than half say they also are exposed to electronics during their first waking hour.

Blue light is especially concerning when it comes to the young. Seventy-four percent of teenagers (14-17 years of age) use electronics on a regular or occasional basis. A whopping 93% of all teens are able to access a computer. Even little kids are exposed to blue light. Seventy percent of American parents state their children spend over two hours behind an electronic screen every single day.

There are two different distinct types of damage that can take place due to blue light exposure. The first is caused by short but intense contact to blue light. The second has to do with longer, less intense exposure. Both types are responsible for serious implications not only to the eyes, but to many functions within our bodies.

Some people don’t even know they are affected by blue light wavelengths. All they know is that by the end of most days, their eyes are red and tired. Sometimes their eyes ache or they have a headache too. The Vision Council estimates that 200 million individuals in the United States suffer from Digital Eye Strain, or DES.

Exposure to blue light can turn into serious conditions too, like macular degeneration. Since blue light increases the production of ROS in the mitochondria of lens epithelial cells, it is suspected that it can cause the development of cataracts. It has also been speculated that blue light may play a role in contributing to cancer and diabetes.

Ongoing studies are finding even more concerning evidence on how blue light affects the health of our eyes. It has recently been discovered that blue light inhibits the eye axis’ growth and also damages the cavity it is housed in. The results of the continued investigations are scary, but real.

Fortunately, there are some measures we can take to reduce our exposure to blue light, such as: 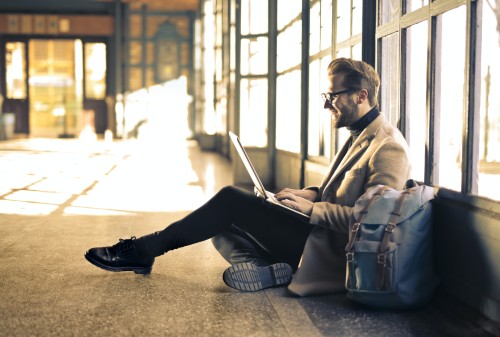 What are Blue Light Blocking Glasses?

Blue light blocking glasses have tinted lenses that feature anti-glare protection from what ophthalmologists call “high-energy visible light”, or “HEV”. Since these type of lenses reduce your exposure to blue light wavelengths, they reduce the harmful effects they can cause. Blue light glasses can also relieve and improve the symptoms associated with computer vision syndrome.

Many people trust their eyes to blue light blocking glasses. Others, however, don’t. Why is that? A good number of people aren’t aware that blue light glasses (computer glasses) really work. Others don’t know enough about blue light to even realize how harmful it is and are therefore oblivious to the symptoms they are being constantly bombarded with.

The fact of the matter is, yes. Blue light glasses really do work.

How Do Blue Light Glasses Work?

Blue light blocking glasses are able to absorb and block blue light. They can also sometimes cut out Ultraviolet (UV) light as well. They are able to do so by interfering with the transmission of the wavelengths that originate from the upper end of the blue light spectrum.

Anti-glare coating is often added to the lenses as a double defense. Some frames even have blue light blocking components in them for ultimate protection.

Eyeglasses date back to the Romans in the 13th century who set about to find a cure for faulty eyesight. Through experimenting with various materials, they discovered how to use glass to make small words larger, thus correcting many vision issues.

The Vision Council proclaims that about ¾ of all adults (over 188 million people) in the United States currently wear corrective lenses, either glasses or contacts. Many wear specialty lenses that have been added onto the scene throughout the years.

Blue light blocking glasses are one of the latest developments in eyeglass technology in the past century. They came about after studies of blue light were conducted. By wearing eye glasses that blocked blue light, melatonin levels increased, mental and physical energy were restored, and other symptoms of blue light exposure diminished.

The research spurred the introduction of what we now know as blue light blocking glasses which reduce the amount of blue light that reach the eyes. These special glasses are available in both prescription and non-prescription.

The Proof is in the Pudding

According to Web MD, just a few years ago, in 2017, a study was conducted by the University of Houston to test whether or not blue light blocking glasses really helped reduce or eliminate sleep issues due to blue light exposure. The verdict was returned two weeks later that the glasses helped by an astounding 58%.

Harvard University has also been proactive in studies on blue light emission. In one study, it was determined that while all light can reduce the amount of melatonin production, blue light was especially bad about it and it was found that the suppression was worst at night. An experiment was conducted to compare blue light against green light, both of comparable strengths. It was concluded that blue light decreased melatonin for about two times as long as the green light did.

Building on the Harvard study, the University of Toronto set about to see if glasses could decrease or eliminate the amount of blue light that was coming into the body by way of the retina. The study found that indeed, glasses were able to solve the problem. While sunglasses or regular tinted lenses, worked to a degree, blue light blocking lenses obviously work even better.

A multitude of other tests have also proven that blue light blocking glasses and computer glasses are very effective for relief in many realms, both physical and mental. The best way to test them out is to try a pair for yourself though. You may not notice the results immediately, but then again...you might.

Who says blue light glasses have to be boring? They don’t! Blue light and computer glasses come in a myriad of top-fashions from some of the most popular brands in the world. You’ll find them in various tints, shapes, and sizes. You can get them with or without magnification strength. They come in all different price ranges too.

Even if you don’t need vision enhancement, have had surgery to correct your vision, or wear contact lenses, you can still wear blue light blocking glasses for the sole reason of shielding yourself from the destruction of blue light.

There are already enough facts supporting the value of blue light blocking glasses even though the full spectrum of the damage is yet to be seen. As research continues to unveil the implications of the harmful effects of HEV, it’s good to know we have great options for protection.

The bottom line is that blue light blocking glasses are a smart choice for those who want to take care of their eyes in style and, who doesn’t?